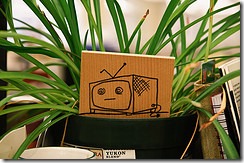 According to the latest release from Nielsen Wire, the average American home has 2.93 TV sets, a jump from 2.86 TV sets in 2009.

I’m sure glad they didn’t ask me to participate in that survey, because I’m not sure how I’d answer. But to help out the good folks at Nielsen, here’s how I’d try.

Let’s see. First, there’s the TV in the family room. It’s a 52-inch Westinghouse LCD, definitely a TV because it has an over-the-air (ATSC) TV tuner that’s not used, along with built-in speakers. It’s connected to a DirecTV satellite receiver — along with an Xbox 360, Wii, and a Sony Blu-Ray DVD player. I get "TV" via the DirecTV receiver, but I also get TV shows on the 360, Netflix on the Wii and Blu-Ray player, and YouTube on that Blu-Ray player. We’ll count that as a "one."

Moving on to the kitchen, we’ve got a 19-inch LCD TV, with built-in speakers and an ATSC TV tuner, again, that’s like a wing on a penguin. It lacks any classic "TV" sources, but it is connected to an Apple TV that is mostly used for Boxee — and through which I watch baseball games and other "TV" programs, purchased from Amazon or streamed via Boxee’s service. Is that a "TV"? It has a TV tuner, yet it isn’t used. But yeah, it’s probably a TV. So that’s two.

It gets a little harder when we move to the living room. There we’ve got a 32-inch LCD monitor that lacks any sort of over-the-air tuner at all, but does include built-in speakers. It is connected to another DirecTV HD receiver. Is that a TV? It’s used to watch NBC, ABC, Disney, MTV and the like — mostly on-demand, via the built-in DVR. But the set lacks a TV tuner — not that I’d actually ever use one, because I mostly detest live TV. But because it is used to watch traditional broadcast and cable, we’ll call that a "TV" too. We’re up to three.

Let’s go back to the bedroom. There we’ve got another LCD TV, an older Gateway model, which includes a TV tuner, but only the older, obsolete analog type. It’s got a Panasonic Blu-Ray player hooked up to it, which is used to watch movies on disc, but also TV shows and movies via Netflix, along with baseball and independent web TV shows like ours from Revision3 on that Roku. Is that a "TV"? I’m guessing yes, because it actually does have a TV tuner, and includes integrated speakers. Four.

Dropping downstairs to the office it gets even more confusing. There I’ve got a 42-inch Panasonic plasma display that lacks speakers and a TV tuner. It’s essentially a big computer monitor. Yet it mostly displays shows from DirecTV, along with games and video via a PS3 and another Roku. It’s a bit of a gray area, but yeah, let’s call it a TV. Now we’re up to five.

Out in the garage is another conundrum — a 24-inch computer monitor that’s clearly not a TV. But it’s also connected to a DirecTV receiver, along with my garage computer. Sometimes it displays TV, sometimes Windows. What’s that? A half a TV, half a PC? Sure, I’ll go with that.

But what about my office computer? It’s definitely not a TV, because it is used mostly for work (and some games). But I’ve got an external HDTV tuner connected to it, via a USB connection, and I use Windows Media Center to record broadcast HD shows — mostly NFL football games in season. Is that a TV? What about the three notebook computers we have that each run the DirecTV2PC software, which streams shows from the satellite DVR to those notebooks via my home network. Are they TVs?

Now we’re up to 10, for a house of three. A bit excessive? Yes, but I haven’t even started counting the smartphones, iPads and other "screens" that will be increasingly littering my house, and capable of playing "TV" of one form or another.

So yes, I definitely think the number is increasing. But if you count everything capable of displaying a video signal, streamed from a hard drive, satellite, cable or IP connection, that number will grow and grow and grow.

I’m glad I’m not the one doing the survey. Because I got me some TV to watch!

One Thought on “What, Exactly, Is a TV?”