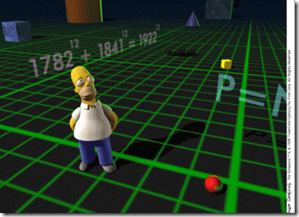 Traditional web and television advertising gets purchased mostly via a two dimensional graph of reach and frequency.  But internet video has added a third dimension to this analysis, creating a far more effective and efficient way to galvanize a core audience.

Most of my discussions with large brands and agencies over the past 15 years have focused on reach – or raw volume of eyeballs exposed to an ad unit, and frequency – how many times a particular set of eyeballs sees the message.  These two metrics pervade traditional television advertising, and result in a bombardment of messages.  If you don’t skip commercials via your DVR, and watch television with any frequency at all, chances are you see the same old, tired, dull ads over and over and over again.

The truly bad ones become legendary – like Toyota’s "Saved By Zero" campaign that was widely lambasted – in part because they reached so many, so frequently, with such a terrible song.  Force feed enough pabulum to anyone frequently enough and they’ll  puke all over your message. And that’s exactly what happened here.  Toyota claimed that the campaign was successful, but I’m not so sure – they still swung to a quarterly loss, despite amazing reach and painful frequency.

On the web, reach and frequency are often abused to make up for the poor performance of most banner ads.  If they’re not screaming at us, or blinking madly, we mostly ignore their presence.  Thus the text web has evolved into mostly performance-based marketing – paying sites more and more on clicks and actions, and not based on reach and frequency of banner impressions

But just as the text web developed its own powerful and effective mechanism that’s supplanting reach and frequency, the video web has begun to discover its own unique selling proposition.  It’s a new factor – "Depth" – that adds a third dimension onto the advertising landscape by grafting a host’s social graph onto the 2D media landscape.

Take a look at some of the best online video shows out there, including our own Tekzilla, Hak5 and Diggnation, but also Next New Networks’ Thread Banger and Non Society, along with You Suck at Photoshop, TikiBar and Wine Library TV.  Each are dominated by engaging, personable and talented hosts who have a direct, intimate connection with their audience – which is manifested by huge followings on twitter, Facebook, MySpace and elsewhere.

Their shows build on that direct connection by enabling an unparalleled Depth of engagement to a marketer’s message.  Whether it’s Kevin Rose extolling the virtues of Michelob, Veronica Belmont explaining the benefits of HP’s Media Smart Server, or Meghan, Mary and Julia expounding on the sexiness of Degree anti-perspirant, these shows provide a depth of engagement with a brand that simply isn’t possible on any other medium.

How powerful can this "Depth of Engagement" axis be for a brand?  We were part of three separate surveys in 2008 that proved the powerful and cost-effective benefit of this new metric.  Our own internal studies show amazing recall, awareness and action from our audience – 93% unaided recall of two or more sponsors, and a whopping 48% that purchased a product or service from one of our sponsors.  But it’s the two other – sadly proprietary — studies that really hit home.  In the first, a major marketer found that in-show host endorsements, along with in-depth post-roll video, provided an amazingly cost effective way to create awareness, affect intent, and drive positive brand impressions.  In the second, another consumer marketer credited our integrated plan as the linchpin for building a strong, core, passionate group of ambassadors that proved critical in successfully repositioning their brand.

The text web has been built on CPC.  But the video web is as different from the text web as it is from traditional television.  It’s a new medium and it provides marketers a new weapon in the battle to convert consumers into paying customers and brand ambassadors.  Just as the web gave rise to interactive marketing agencies that built core competence on SEM and CPC marketing, the video web will create a new discipline, and a new way to reach audiences by layering a third dimension onto the Reach and Frequency graph.

Internet video isn’t the end-all for every campaign.  But brand managers, marketers and agencies need to add Depth into the mix, along with Reach, Frequency, SEM and CPC.  Those that don’t will be missing a new, cost effective way to reach core consumers – while their competitors will be building deep, and engaging conversations with their former customers.

See, you don’t need to lie about your web video numbers to make money!  Read my previous post for details about how Internet video is shooting itself in the foot by faking reach and frequency, instead of focusing on its unique characteristics.