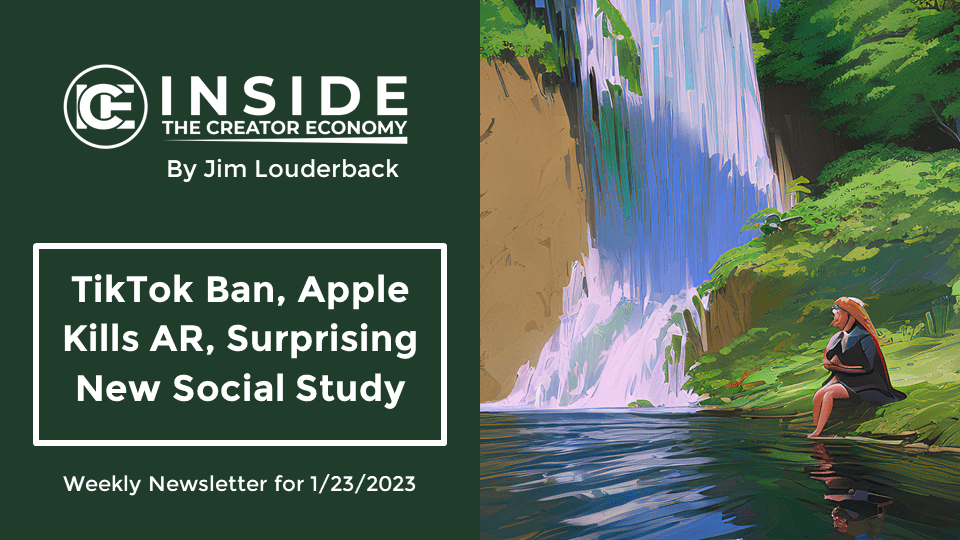 This Week’s newsletter covers the latest updates on the future of AR technology as well as the ongoing transparency issues with TikTok. It also includes a comprehensive look at the state of social video in 2023 and discusses the emerging trend of leveraging internal creators within companies. Plus, more on the latest developments in the creator economy, including updates on Discord, YouTube, LinkedIn, and Instagram. Also, join me for a Paris ICE Meetup on Feb 2nd, details below! It’s the 4th week of January 2023 and here’s you need to know now.

Guess this won’t be the year of AR: Apple postponed its highly anticipated AR glasses indefinitely, which sounds like “cancelled” to me. However, its $3,000 AR/VR headset might still see the light of day by the end of the year. Many proponents thought Apple would jumpstart AR just as the iPhone ignited mobile phones. But a lack of truly useful use cases – along with hardware and battery limitations – likely pushed the product to the sidelines. Another setback for the future of immersive worlds.

TikTok Promises More Transparency (again): TikTok is working with the US government to keep from being banned, offering deeper transparency into its business, but I’m still skeptical. The company has promised this in the past but been repeatedly caught with its pants down. And as more universities and governments restrict TikTok access, things look grim. I still don’t think it’s going to be completely banned, but recommend creators and brands create backup plans – and build a presence – on other short-form platforms. And in related news, looks like TikTok employees really can make ANY video go viral – including sometimes their own – how embarrassing.

Social Video Shows No Sign of Slowing Down: Comprehensive look at the state of mobile in 2023 from Data.AI (used to be AppAnnie) shows time spent on social last year was up 17%. Good data on TikTok, YouTube and the rest of the social video/streaming economy as well. I was particularly surprised by just how popular TikTok coins are, and how Snap’s subscription model seems to be taking off. Also interesting to see new social apps that climbed the charts in 2022, including private sharing apps LiveIn and Locket Widget, TikTok competitor Kwai, Twitter alternative Hive Social and Singaporean funny video app CocoFun. Oh, and speaking of the next generation of apps, Mario at the Generalist looks at how BeReal, Mastadon, Post News and others are redefining the social and creator experience.

Leveraging the Creators in the Mist: Chances are, if you’re at a company with more than a handful of staffers, one of them’s a creator. It might even be you. In the past many employees tried to keep their creator life secret but that’s starting to change. Last week we explored how smart HR execs are using TikTok to recruit workers, but that’s just the beginning. Internal creators can do much more than woo recruits, they can humanize your brand, create excitement around your products and help shape and promote culture too. It’s an emerging trend we’ll see in 2023 – and I think we’ll soon see internal creators not only recognized but compensated for their efforts. If you’re not already embracing those creators, now’s the time to find them and support them too.

Reach and engage with a 20,000 creators, content makers and industry leaders each week by sponsoring this newsletter! Read this for more information and/or email me at jim@louderback.com

My last tip is that if you are in Paris, or can get there on February 2nd, come join me and my friend Hugo Amsellem for a meetup! Details in next week’s issue but mark your calendar!

See you around the internet, and feel free to share this with anyone you think might be interested, and if someone forwarded this to you, you can sign up and subscribe on LinkedIn for free here! And don’t forget to listen to The Creator Feed – the weekly podcast Renee Teeley and I produce – get it on Apple Podcasts, Spotify or Stitcher!