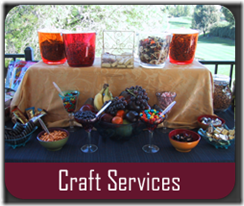 Nothing epitomizes big budget television to me like craft service. It’s a separate part of production that makes sure the actors and crew are fed. In many places, it’s even a union job. And if you’re considering it for your web video production, you’ve already lost.

I don’t mean to belittle the profession – it can be indispensable on large productions with mega budgets. And someday videos made for YouTube might actually be big and profitable enough to afford it. But in the immortal words of Buzz Lightyear: “Not Today Zurg”.

And that leads me to my sixth and final way to fail on YouTube – pretending you are TV.

Early on in my Revision3 days I met with a lot of companies that considered web video a gateway drug. Success on YouTube, they posited, was just a stepping stone to success on cable or broadcast TV. From National Banana to Ripe TV, their focus, storytelling and budgeting was all focused on finding the next big breakout TV format.

And while they were burning cash, folks like Shay Carl, Phil DeFranco and iJustine were making videos in their basements, and building huge passionate audiences that would ultimately lead to fame and at least a little fortune. But apart from moving pictures and audio, what these subterranean video dwellers were making had very little resemblance to typical TV.

It’s still true today. Even though some YouTube stars are pulling in millions of dollars a year, there just isn’t enough money going around to support even a fraction of the production expenses you see on the smallest TV shows.

Shortly after Discovery bought us, I was lucky enough to visit the set of a new show for one of our smaller networks. The production company was making 10 episodes, and the rough cost per episode was about $400,000. I later learned that even a mid-level reality TV show had a team of 20-30 folks that would descend on whatever slice of life was being exposed – and stay there for weeks!

Do the math. If you average about $5 in ad revenue for every thousand views, you’d need 80 MILLION views just to break even on that $400,000 production cost. That’s like scoring a “What the Fox Say” every time you post something. And that just isn’t going to happen.

Even what I consider the most successful “expensive” YouTube series – Video Game High School – barely broke even. They spent $22,979.32 on craft services, and nearly $700,000 overall – even with free labor and other creative financing techniques. You can check out the cost breakdown yourself in this great article show creator Freddie Wong wrote last year. So yes, you can spend TV-style money and maybe make a little money. But you’ll need to corral the most talented creators in the web-original video world and call in a LOT of favors. And even then you’ll probably still lose a lot. (as an aside, I’m looking forward to a similar analysis of Season 2 of VGHS).

So before you start shooting your super-amazing new YouTube series, take a close look at that budget. If you see the words “Director of Photography”, or “Grip” or you’re paying for a lot of special effects and sound design you should be afraid. Very afraid. Unless you’re the second coming of YLVIS – and you can do it every time – you’re probably throwing money away.

And if there’s a craft services line you better just throw in the towel. Because unfortunately, web video just isn’t big enough to support TV food.