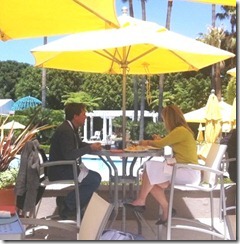 Almost since the first computers were used to make movies (rumor has it that at least *some* of the crows in “The Birds” were animatronic), the annual Digital Hollywood conference has pulled together LA, NY and San Francisco executives together to try to make sense of it all.

The discussions are the same every year: digital is coming, you better beware. But the conclusions are often depressingly similar: it won’t happen overnight, so feel free to eat, drink and by all means don’t forgo your daily dose of hookers and blow.

This year, like I’ve done for years uncounted, I dressed up in my LA Douche Bag Best (designer jeans, untucked stripey shirt and blazer), and flew down to LAX from San Francisco to sprinkle a small dose of my admittedly fashionable views about the place.

As usual, I was on a panel with what felt like the entire cast of Glee. And as usual, the room was packed with folks dressed like me, concerned either with protecting their elaborately constructed fiefdom, or horning in on same.

And after a day of listening to my fellow panelists, along with a variety of other speakers, I had to share what I saw as the five biggest deceptions being bandied about as a way to justify entertainment industry’s emulation of Alfred E. Neuman (What Me Worry?).

Let me state, right up front, that I fundamentally believe that soon almost all of our entertainment and information will be delivered via a digital IP connection, and that every single screen – from the smallest phone to the largest HDTV – will be used for viewing video content. If you don’t buy my thesis, you’ll probably find my lies unconvincing. So with that, here’s my list:

1) INTERNET VIDEO IS “DIFFERENT” FROM TV

One executive from NBC pointedly said that “we make television episodes and short form content”, and that the former were real entertainment, and the latter basically ads. Another derided online video as “podcasts”, said with a sneer curling about his bushy upper lip. Well I’ve got news for you two – and the others there too. Video is video. What’s the difference between The Osbournes and Shay Carl? I mean besides the fact that Shay gets nearly 400,000 views for each of his 220 episodes, and a million folks love his family so much that they’ve subscribed to his channel. Take that, Jon and Kate, Ozzy and Sharon and Hulk and Linda! Whatever you call it, web-based video is aggregating audiences as big, as passionate and as valuable as network and cable shows.

With the code word “money” standing in for big budgets. The unwritten corollary, of course, is that if you’re not spending carloads of cash, you’re making dreck. On another panel, I learned that if you spend more than $25,000 a minute, you’re covered by traditional union agreements – less than that and it’s classified as “New Media” and residuals and other Hollywood Hind Teat sucking doesn’t apply. Well guess what? Great shows, including Shay Carl, our own Epic Meal Time, The Bannen Way and many more were created for a small fraction of those costs, and are just as good (and arguably better) than any of the “good stuff” being foisted off on traditional TV. Size might matter in the bedroom, but it sure doesn’t apply to budgets and quality.

The corollary there is that because the shows are so expensive to make, they need to be windowed to death so that the teats can be fully filled with analog dollars. In other words the episodes are dribbled out through a succession of “walled gardens” where more and more money can be wrung out of the system. That old world just doesn’t work in the age of IP-based delivery. When anyone, worldwide, has access to the same servers, the same bits and the same streams, it’s virtually impossible to lock those bits and streams down – at least not for long. Windows and walled gardens are dying. Deal with it and adjust your business model accordingly.

4) IT’S ALL ABOUT THE BIG, COMMUNAL, HD EXPERIENCE

Although programmers see live video on the big screen as the holy grail, it’s not just that screen that matters, it’s all of them. At Revision3, our 13-34 year old viewers – who are early adopters of what everyone will be doing soon – live in a best screen available world. If you want to watch Diggnation, and all you’ve got is your smart phone, that’s where you watch. But at home, with better screens, that same show is streamed – or picked up halfway through, on those devices. Yes, community matters. But you can have just as strong a community experience on 4” screen as on a 40” one.

This one’s wrong on both fronts. First, as described in my debunking of the last lie, it’s not about the living room, it’s about every room. It’s not about the HD screen, it’s about every screen. And finally, the battle for what gets delivered to those screens, and where they are being watched, is incredibly important and has only just begun. This battle will be fought household by household, and will move quickly.

My house is a great example: the iPad era began on December 25th, 2010. Since that time my wife and my 11-year old son have transitioned from watching primarily cable TV on the big screen to Netflix, YouTube and HBO Go on their tablets. “YouTube’s better than TV” my son said the other day, “there’s more on that I want to watch”. And my wife agreed. Our HDTV is so under-used that our power bill has dropped by 20% (enough to pay for those iPads in a year). That’s a win in my book, but a clear loss for traditional operators.

6) TRADITIONAL CABLE AND SATELLITE WILL CONTINUE TO LEAD

The general mood at Digital Hollywood was that DirecTV, Comcast, Time Warner and other multichannel operators had built an unassailable position. But behind the scenes their monopoly was crumbling. My last Ad Age post talked about Comcast and others looking to build a virtual cable network riding upon the IP network. Digital Editor Michael Learmonth followed up with a story about Verizon, building a network to enable just that. And I met yet another company that’s pulling together what I’m calling a VMNO (Virtual Multichannel Network Operator), planning on delivering tiers and ala carte channels via IP to smart TVs and other internet connected devices. Just as MVNOs deployed across traditional cellular networks, these VMNOs – combining traditional cable channels with digital-only networks like Revision3, will begin to roll out later this year. And unlike most MVNOs, which failed, VMNOs will be a raging success.

7) CONSUMERS ARE GETTING CLOSE TO DEVICE SATURATION

This one just made me laugh. Someone’s getting cranky after buying new tablets and smartphones every nine months or so for everyone in their family. Forget saturation, we’re actually experiencing device acceleration. Revision3’s staff is comprised of mostly 20-30 year olds, and they’re buying new Apple devices as fast as Cupertino can release them. I jokingly suggested that we create an FSA-style pre-tax deduction letting staff tithe 10% of their income to Apple, and more than a handful said they’d sign up for that program. These new, shiny devices define ourselves today, as we create a patina of progressive connectivity to cover up our FOMO (Fear Of Missing Out). If you’ve got device fatigue, you’re not living in today’s world. And, of course, you’re probably going to Digital Hollywood to affirm those digital Huns storming your cleverly constructed walled gardens are just a pesky annoyance.

There were definitely a wide range of smart folks doing more than just spewing to the old media party line. Unfortunately they were often drowned out by the traditionalists. So by all means go to Digital Hollywood next year – I know I will. But listen for the voices of dissent, not those of consensus.

One Thought on “The 7 Biggest Lies From Digital Hollywood”