Often our perception of quality and value are colored by our experiences. Consider food, for example. If all you know is McDonalds and Dennys, Sizzler and Olive Garden are an amazing upgrade to gourmet food. But for devotees of Spagos and Per Se, their food would be barely passable.

It’s the same for cell phones. Feature phone and Blackberry users, accustomed to the limitations of their platform will perceive a new device differently than devotees of the iPhone or the better Android devices.

I was reminded of this quirk of human nature while spending a week with RIM’s latest Blackberry, the Torch/9800, Rim’s new hybrid phone that combines an iPhone-style full-screen multi-touch device with the classic and much-loved (by execs and some few others) Blackberry keyboard.

And for some – including myself – who have been feasting on Blackberry’s previous model, the 9700 Bold, it’s quite the upgrade. The 9800 includes all the great features Blackberry fans have come to love, including great email, great phone features, and a great keyboard. It’s also about the same size as the previous, non-sliding 9700 Bold, but with so much more functionality and capability. 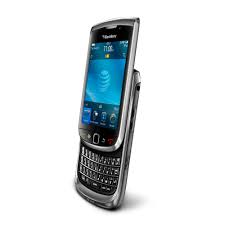 As with most RIM devices, the best part about the 9800 is its ability to place and receive calls, and the great email inbox. Unfortunately RIM seems hellbent on having you merge all of your messages – including twitter DMs, SMS, and mail from multiple mailboxes – into one single interface. Sure that’s nice for some, but I’d like the choice to put my work email into one inbox, and my personal email into another – and adding in Twitter, SMS and even Facebook messages just makes it too cluttered.

And like other Blackberries, battery life was awesome. I’ve gotten incredibly frustrated over the last few years with supposedly “smart” phones that turn into paperweights after half a day of light texting, calling and surfing (I’m looking at you EVO, iPhone, G1). I easily stretched the Torch to two days without recharging, which is an amazing feat in a touch-based screen phone.

And Blackberry users will really go gaga over the new OS – version 6, which will supposedly be making its way to older models over the next few months. The new OS is a welcome upgrade to the tired menu-based options of past versions, and icons and touch are pretty well integrated – at least on the surface. Unfortunately once you get into some of the included apps you end up with the same old tired interface – here’s hoping RIM finishes the job to a modern graphical user interface with version 7. If all you know is past Blackberries, you’ll find the new OS snazzy, modern and sexy. But for iPhone and Android users, it’ll be a step back.

Unfortunately, and especially for iPhone and Android users, there are some major drawbacks. First, at just 480×360, the screen is a far cry from the crisp and clean 800×480 pixels found on the competition. It’s an upgrade from tiny feature phone screens, certainly, but looks awful compared to the high-end competition.

The phone is also slow. The 624MHZ processor – the same found in the 9700 – stutters, stops and freezes regularly, making for a less than seamless experience. Again, if you’re used to older phones, or any Blackberry, it’s not going to be a problem. But for phone snobs, it’s just not going to cut it.

But the worst part of the Torch, from my point of view, is that it is only on AT&T, and not T-Mobile. I’m not ready to ditch T-Mobile for the overcrowded AT&T network yet, and that makes the Torch out of touch for me.

Blackberry Bold Problems Arise: And it’s too bad, because I’m starting to sour on the 9700. Initially I loved it, and certainly I’ve enjoyed using one over the past 6 months. But RIM’s quality level and attention to detail on this model are sorely lacking. I’m on my third unit, and it’s still not rock solid. The first one had its speaker go south after a few months, and the second lost its “Q” key from the keyboard inexplicably one day. The third unit is proving to be the worst of all, as the internal speaker has become almost painfully tinny, and there’s a nasty software bug that causes the phone to lock – and never unlock.

The whole handset lock situation with Blackberry is all messed up with the 9700 to begin with. Clearly RIM expects you to use their included holster, which locks and unlocks the phone using a small magnet. But I’m not ready to look *that* geeky, instead preferring to put the phone in my pocket. Which, alas, has led to a spate of pocket dialing (my apologies if I did it to you), and even one extended bout of pocket tweeting that caused my poor followers no end of confusion. And now the phone locks up and never comes out – sometimes a physical reset works, other times I have had to resort to downgrading the OS. Quite by mistake, I noticed that inserting it in the holster will reset the lock logic – but I’ll be darned if I wear that thing around.

I’m not alone either. A quick search online shows that many other Blackberry users are plagued by the same lock, speaker and keyboard problems. Hopefully RIM is addressing those quality issues, and the Torch fixes the problems. For now, I have a phone that often will lock up, never to return no matter how many times I angrily stab the unlock key — while on other occasions will start inexplicably dialing and tweeting to the world while nestled snug in my pocket.

Look, I’m no phone-foodie (phonie?), but I’m not fresh off the bus either. I love all the great phone features that RIM is so good at, including battery life and phone capabilities. But I’m concerned about quality overall at RIM, and unfortunately the Torch remains a generation behind the competition.

But the short of it is that if you’re moving up from a Blackberry, this is an awesome choice – because it combines the best of the Blackberry tradition with a multi-touch full screen environment. The new OS version is miles better than its predecessor. But it is absolutely part of the schizoid Blackberry experience – to a local yokel, the Torch is a feast of tasty features. Those with a more sophisticated mobile palate, though, will find it flat.

2 Thoughts on “Blackberry Torch Review: The Sizzler of Smart Phones”