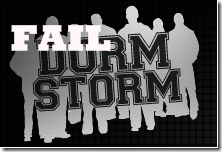 When I first heard that Broadband Enterprises was promising 20 million views across five episodes of its "Dorm Storm" show, I was flabbergasted (and just a bit jealous).

For you math challenged, that averages out to 4 million per episode.  I’ve seen the numbers, and I know that it’s really, really hard to get even a quarter of a million views per episode over the course of an online video series, so those total numbers for the HP underwritten series, seemed to be the web video version of Operation Market-Garden.

But then, thanks to an insightful article from Tilzy.TV’s Jamison Tilsner, I discovered how they were planning to deliver those amazing view counts:  they’re pushing the videos into banner ad slots across thousands of web sites.  That means that if you stop by a favorite site, instead of an ad for the University of Phoenix, or Windows Vista, you’ll get an episode streamed into that ad spot.

It’s not a unique strategy.  Family Guy creator Seth McFarlane’s latest show Cavalcade will be distributed, via Google, into ad slots all across the Internet too.

Is this a breakthrough in video distribution, or just another dumb idea.  If you saw the headline, you’ll know where I stand, and here’s why.

I spent much of the last ten years running Internet sites.  I launched ZDTV’s web site, and then moved on to Ziff Davis to resuscitate the web presence for PCMag.com, ExtremeTech, eWeek.com and many more sites.   What I learned should be no surprise with anyone with a TiVo:  standard ad units are easily ignored by most consumers.

If they can skip them, the will.  If they can run ad blockers, they’ll do that too.  But even if they don’t block the ads, human beings seem to have this selective attention capability (which probably originally evolved to help us pick the prey or predator from the weeds) that essentially helps us tune out those ad units.

Pick any site you visit regularly.  Pop it up on your browser right now.  Did your eye just slide over the ad units on the page?  Bet it did.   Evolution basically turned our brains into ad-unit irrelevancy engines.  That’s why an increasingly strident series of ad types flood the net, from prestitials to video.

And yes, those MPU ad formats (the big almost square ones) have recently become a graveyard of video ads.  Microsoft’s running its Vista surprise campaign videos everywhere, as are many others.  But these are the exact same places that Dorm Storm and Cavalcade are playing.

And that’s the problem. We’ve been conditioned to interpret those rectangles of screen real estate as ads – and to ignore them.  When a video autoplays in one of those slots we naturally tune it out – or feel terribly guilty when we’re sucked into watching it.

Oh, and I learned something else too:  autoplay ads suck.  Blindsiding web surfers with videos that autoplay is the web equivalent of farting in an elevator.  It’s just wrong.

So that’s why I’m so skeptical of these attempts to juice video plays by inserting them into ad streams.  Sure, they’ll report these "autoplay" numbers as if they were actual video views.  But they’re not.  It’s as if they pumped the video through that huge video billboard on Highway 101 and counted every commuter as a viewer.  That’s not an impression, it’s an illusion.

It’s not only wrong, but it’ll generate lots of ill will as well.  If it looks like a duck, quacks like a duck, and poops like a duck, it’s a duck.  And from where I sit (and for most web surfers), stuffing video content into ad units is just ducked-up.