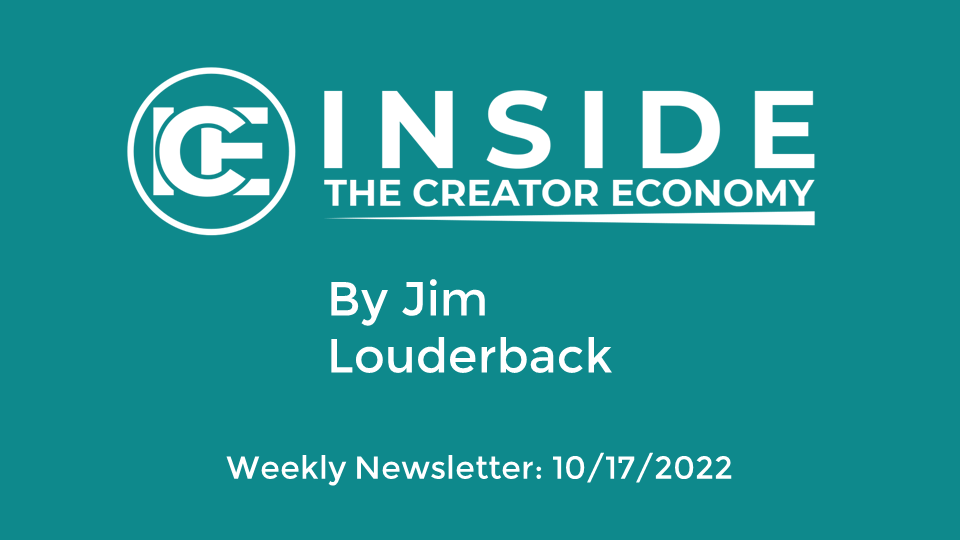 Here Comes the Creator Economy Backlash: Now that the creator economy has gone mainstream, you should expect negative takes to flourish. Two of note this week. First Hugo Amsellem of Jellysmack argues that the music industry and the creator industry are uncomfortably similar, with meaningful revenue only flowing to a small subset. I’m more optimistic about a middle-class than Hugo, but his article is a must read, and identifies 5 clear areas of growth. Andrew Hutchinson has a harsher take, saying it’s not the creator economy, it’s the creator fantasy – because you all “suck at making content.” I strongly disagree, but read and decide for yourself.

Slouching Towards the Metaverse: Facebook released the new $1,500 Meta Quest Pro headset, but does anyone care? Well, I do, since my Quest 2 is now a paperweight. A lot of perspectives followed. On the somewhat positive side, Stratechery likes the device, but thinks Microsoft will have more to gain than Meta. Why? Because like the PC, the metaverse will be corporate first, consumer second. The Platformer wasn’t so sure, but did get a chance to sit down with Meta exec Andrew Bosworth to talk about it. Others were more pessimistic. As for me, I’ve got a demo scheduled at the Facebook store Monday morning, so expect a first look sometime this week.

Major TwitchCon Fail: A very unsafe activation at TwitchCon led to some serious injuries. Shame on the conference organizers – and booth sponsors Lenovo and Intel – for not vetting this more closely. What were you all thinking? Contrast this to the Squishmallow “human claw” booth at VidCon, which was vetted, investigated, analyzed and tested for months by the VidCon team, sponsors and subcontractors before it was ultimately approved. Competent health and safety teams cost money, yes. But it’s always money well-spent. The Publish Press also weighed in on Twitch and TwitchCon (free sub to read) concluding that Amazon would fix it. I’m not so sure.

Imagining the Future of the Creator Economy: The internet upended every industry – from media to taxicabs. The more I investigate AI, the more I see it as a foundational building block rather than instigating a singularity involving robot overlords. But like the internet before it, it WILL transform nearly every industry. DallE-2 and Stable Diffusion are the early AI ripples transforming the creator economy – but tidal waves are on the way. For example, Troy Young thinks this will result in the rise of creative super-humans. For a broader view, read this essay from Evan Armstrong – it pushed me over the edge – as he lays out the five biggest elements of the emerging AI economy and predicts what’s next.

SHAMELESS PLUG: Hey all, I’m hosting the creator economy stage (aka Verified) at Websummit on November 2nd, featuring top creators, CEOs and experts in the industry! Please come join me in Lisbon for great insights and an awesome global event. I’m going to host a meetup somewhere on Thursday night 11-3 in Lisbon, so stay tuned!

Tip of the Week: Are you a celebrity? Afraid you won’t get TikTok “right”? Gawker’s here for you with a dung-heap of tips.

Shameless Plug 2: Proud to be part of the second LinkedIn Creator Accelerator. Over the next two months or so I’m going to launch a new series of tips for startup founders called “17 Ways To Kill Your Startup” – hopefully its relevant for creators turned entrepreneurs (well, they all are already) – along with everyone else building greatness in this space. Thanks to #LICreatorAccelerator!

See you around the internet, and feel free to share this with anyone you think might be interested, and if someone forwarded this to you, you can sign up and subscribe on LinkedIn for free here! And don’t forget to listen to The Creator Feed – the weekly podcast Renee Teeley and I produce – get it on Apple Podcasts or Spotify!