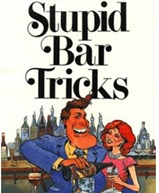 Have you seen Google’s new Chromecast device? It’s a super-cool way to add internet video to almost any HDTV. And for just $35, it’s almost an impulse buy. And guess what – despite some annoying inconsistencies it actually works pretty well. You can easily send videos from YouTube, Hulu, HBO, Netflix and even Revision3 from your tablet, PC or phone to any Chromecast enabled big-screen TV: as long as you’re on the same local network.

But you can do a lot more with Chromecast than catch up on your favorite shows and YouTube channels. There will be a flood of new capabilities coming soon, but even before that happens, you can make your Chromecast do all sorts of dumb tricks.  Here are a few of my favorites:

#1. Send Any Internet Tab to Your TV

You aren’t limited to just video. As you surf the web on your Windows PC – using the Chrome browser – you can cast any tab to any Chromecast-enabled TV. It’s simple. First download and install the Googlecast extension to your chrome browser, which adds the Chromecast logo to the right of the address-bar. Then when you want to cast a tab, simply press the plug-in and select your named Chromecast device (I call mine “Living Room TV”). It’s not perfect – but usually works pretty well. I’ve used it to send non-Chromecast approved in-browser video players – like Aereo – to my big screen TV with great results.  You can even use this to cast some local files to your TV as well – for example, in Windows you can drag an image into a browser tab, and then cast it to your TV.

#2. Send Your Whole Screen to Your TV

Chromecast isn’t limited to just browser tabs. You can ship your whole screen to a Chromecast-enabled TV as well. This is a bit more “experimental”, but worked well in my tests. To do this, follow the same instructions for sending a tab to your TV, but before you select your named Chromecast on the cast pull-down, click the little grey down arrow to the right of the “Cast this tab to…” line. There you’ll be able to toggle between sending a browser tab and sending the full screen. This is great for sending Powerpoint and other presentations to a TV – along with apps and files that won’t load in a browser, like VLC and other video players.

#3. Hack Your Hotel With Chromecast

One of the problems with most hotel rooms is that you’re forced to watch poor quality live TV on the in-room TV – or you have to spend a mint to order up a movie. Chromecast changes all that – although again, like most things Chromecast, it’s not perfect. To do this, simply find an unused HDMI port on the in-room TV. Sometimes this is easy, but often the TVs are bolted to the wall, making it tough to even get access to one of the HDMI ports.

But once you plug the Chromecast in – and find power – you still need to ensure that the Chromecast and your casting device are on the same network.  You could use the hotel’s wireless network but these are typically too slow for video, and often charge on a per-device level, which could make the cost prohibitive. Chromecast also wasn’t designed to frequently change its home WiFi network, and it regularly took me three or four attempts before I could get it to sync up when I changed its wireless network.

Instead, what I do is pre-connect the Chromecast and my casting device (PC, tablet and/or phone) to a personal wireless network. I carry around a Verizon MiFi, which supports five devices over a typically decent 4G connection. You can do the same thing with your phone, if it supports internet connection sharing (just beware the per-bit charge if you don’t have an unlimited data plan). Once your Chromecast and your casting device are on the same network, the entire internet of video is at your fingertips. You can easily watch Netflix, Hulu, HBO, Revision3 or any other source using tips 1 and 2 above.

#4. Magically Turn on Your TV With Chromecast

Your Chromecast can actually tell your TV to switch on – and turn to its HDMI port – automatically when you cast a video, tab or full screen to it. Now this won’t work with every TV, and requires that you power your Chromecast via the included AC-adapter, rather than an on-TV USB port, but when it works it’s almost magic. It’s called “HDMI-CEC”, with the CEC standing for “Consumer Electronic Control”.  Although designed to allow a single remote control to manage multiple devices, it also provides the ability for an HDMI device to turn on the TV and switch inputs. On my Vizio TV I needed to enable CEC for that particular HDMI port for it to work. Some TVs that support CEC call it by a different name – Samsung, for example, calls it “Anynet+”.  And even if your TV doesn’t make a CEC option available, it might be hackable.  This thread on Reddit explains how to get it working on at least one Samsung TV.

Once you have Chromecast working, you’ll start looking at your TV in a different way. No longer simply a rectangular black hole on the wall, Chromecast lets you turn your TV into a visual window into the larger world, even if you’re not watching lean-back (or lean-in) TV. Google will pump a steady flow of images to your TV, and soon one of my favorite apps, Artkick will be chrome enabled.  That will turn your TV into a museum featuring a constantly changing display of the world’s top paintings.

But it’s not just still images. Here at Discovery Digital Networks, we’ve been experimenting with passive video loops that we’ve nicknamed “Lava-Lamp TV”. These are amazing hour-long videos that bring arresting and/or relaxing moving images to your big screen, but are designed not to tell stories but simply to provide great visuals. We’ve mined the Discovery Channel library to put together hours of amazing 3D-dinosaurs, great weather clips, the best space footage, sleek and ferocious shark attacks – all set to soothing electronic music. We’ve even created an hour-long video of the world’s cutest cat – Lil Bub – sitting in front of a fire place, along with a kid-friendly hour of great dinosaur videos.  You can see – and cast to your TV with Chromecast – all of our amazing Lava Lamp videos at our Chromecast / Revision3 video hub.  Happy Casting!