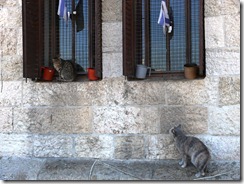 Jerusalem is claimed by Christians, Jews and Muslims. But it’s owned by the cats.

Everywhere you turn, there’s another feral cat or six underfoot. It’s as if the entire town were controlled by some deranged cat lady god, and her furry progeny have taken "go forth and be fruitful" to its absurd extreme.

Cats on the balcony. Cats supping from cups left on windowsills by residents. Cats on a cold night warming themselves on the hot air vents from the marketplace below. Cats licking tins of tuna while tourists queue up to see the Temple Mount. Cats in the street, cats in the alley, cats on the ramparts, cats in the trash cans, cats, cats, cats.

I came up with a killer coffee-table book idea while roaming the back alleys – if only I had more time to actually produce it. I’d call it "Jerusalem: Land of the Holy Pussies". I’ll bet that would sell like hotcakes.

Maybe the Queen of Sheba still rules here after all.

One Thought on “Jerusalem: Land of the Holy Pussies”