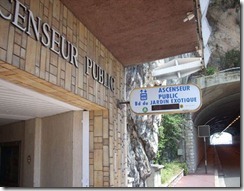 Although I’ve been to Monaco five times now, I’ve never been a big fan of the tiny principality hard up against the mountains and surrounded by the French Riviera. But on this, my latest trip, my opinions changed.

My overweening impression of the country is a unhealthy mashup of Disneyland, Vegas and Rodeo Drive, hard up against the Mediterranean. Pretentious, overpriced and just too darn immaculate, I was sure that the streets were polished by toothbrushes overnight.

But I’ve come to realize that my impressions were unfairly influenced by my accommodations. My first visit, ten years ago, was to attend Acer’s Worldwide press conference. I stayed at the Fairmont Hotel. Situated just below the famous casino, it had splendid views and the soul of a rich whore.

My next three trips were to attend the Monaco Media Forum, a reliable mix of old friends, European media and ad execs I really enjoyed meeting, and a smattering of locals. The event is held in the Monte Carlo Bay Hotel, which resembles nothing so much as a Marriott on the Med. Tucked far away from the action, and up against the eastern French border, it’s as out of the way as you can get in a country that measures just 3 miles across. If the Fairmont is a tawdry Russian Whore, the Monte Carlo Bay Hotel is a faded dowager. Both lacked soul, or indeed any sense of place at all.

So for this year’s trip to the Monaco Media Forum I opted for something more authentic. Instead of the overpriced hotels on the water I opted to stay in Beausoleil France – in a hotel just a few feet uphill from Monaco. In fact, the Odalys Haute Principaute was an "Apparthotel", full on apartments that were available from a night to a week or more.

Despite being a 15 minute walk from the Monte Carlo Bay Hotel, it was a world away. Yes, I was still surrounded by too many bejeweled and sandblasted ex-beauties, and too many overly-precious small dogs. But I also finally felt part of the real fabric of Monaco life. I shopped in the local grocery store, drank coffee with the workmen and strolled down real streets that weren’t over-populated with brands you’d be just as likely to see on Rodeo Drive.

And finally, after five trips, I felt like I’d figured out how to navigate this nearly vertical tiny country.

Monaco can be devilishly confusing. I still remember my first visit, alighting from the train station and being completely and utterly lost. The station, like the rest of the city is carved out of a steep hillside, with the tracks in the center. Head up one way, and you can take an elevator to the one of the highest streets. Head out the door off of the tracks and you’ll be walking down a nearly endless staircase to the sea.

But off on the far end of the tracks is a set of elevators and escalators that take you down to the sea as well. Make a false move, however, and you end up whisked back up to the top, this time near the Exotic gardens.

Too many choices, not nearly enough context. But after a few visits I figured out the train station. And on this visit, the entire genius of the elevator system suddenly came into focus.

Monaco is much like Boston, just vertical not horizontal. When I lived in Boston I realized that there are three ways to get somewhere. The obvious one – which is typically the slowest, the circuitous one, which often yields quicker travel times, and the hidden one which takes years to discover but reliably gets you there in less time.

And that’s where the elevators come in. In Monaco, you can always wind your way around the city, through hairpin turns and switchbacks to get up, down and around. Or you can hit the Stairmaster, climbing up endless flights to ascend from the beach to the casino, restaurants and the sights.

But the elevator system makes the place much more manageable. It turns out there are an array of elevators that makes navigating the city a breeze. Don’t worry, it’s still a work-out. But since you’ll be climbing and descending countless steps anyway, the elevators really help.

It’s a bit disconcerting at first. You typically head into what looks like an office building, and then along a dispiriting hallway of linoleum and florescent lights. The elevators themselves are simple stainless steel, but they perform miracles. Suddenly, after 30 seconds or so, you pop out and you’ve gained hundreds of feet of elevation. Effortlessly.

I passed this wisdom on to a couple of friends also at the media forum and they were flabbergasted. "Elevators? Really?" But once you know how to find them, it’s simple to take advantage of these legsavers.

And once I mastered the elevators, I could get from spot to spot simply and easily. And because I wasn’t staying in a soulless corporate hotel, I felt like a real denizen of Monaco, not just a fleeting visitor.

And I came to like the little place. Sure it was still overrun with too many cigars, too many Russian hookers and too much pretension. But I found I could ignore all that, and actually enjoy this pretty country on the Mediterranean.

So if you do decide to go to Monaco, don’t miss the centers of debauchery at the Casino, the Buddha bar and the Hotel Du Paris. But stay at the Aparthotel and get out of the touristy places. Definitely bring walking shoes, and pick up a copy of the local map. Look for the many "Ascenseur Publics" – you’ll still climb a lot of stairs. But not as many, and you’ll end up getting to places you’d never visit. Oh, and good luck with the train station. You’ll probably need a few trips to get it right.