“There’s battle lines being drawn.
Nobody’s right if everybody’s wrong.
Young people speaking their minds,
Getting so much resistance from behind…” 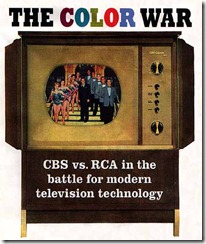 We’re in the middle of a yet another huge platform war for future of internet video and TV. There are four players with different and often opposing viewpoints, each with a shot at success. The story over the next three years will be which one will provide a winning service to enable viewing across every glowing rectangle in our lives – from the smallest smart phones to the biggest smart TV. Below are the four platforms, ranked by my own current likelihood of their success – along with some of the interesting quirks and challenges that remain.

GOOGLE: With Android, Google TV and YouTube, Google wants to be everywhere. Android already leads the smart phone race, with 550,000 devices activated every day. They’re trailing in the tablet space, although sales figures compared to the iPad are eerily similar to the early days of Android phones. And even though GoogleTV has been a flop, the company is angling to have Android become the dominant operating system for Smart TVs – with GoogleTV coming along for the ride. That market’s wide open, as Yahoo’s early efforts falter, and none of the other contenders (Flingo, Boxee) separating themselves from the pack. And with YouTube providing a unique and desirable library of content, Google has a lever to use to aid adoption. To date, however, Google has opted for Youtube ubiquity vs. scarcity – and I don’t see that changing.

Speaking of GoogleTV, the next version (due out real soon now) should make it easier to navigate, discover and consume video. They’ve already taken a big step forward by embracing the Android marketplace, and allowing a wide variety of apps to load-in and be useful. I’m hoping that they take less of a one-size-fits-all approach, and focus more on integrating the web video into the already-existing TV experience in most people’s homes. And they better make it work with a standard remote control – only the geeks want a full-on keyboard in their living room. Finally, they need to bring the cost down to $99 or less – and focus on AppleTV and Roku, not the “TV PC”.

APPLE: The company currently has a dominant position in tablets, and owns significant smartphone mindshare and marketshare. AppleTV to date has been disappointing. The company has sold millions of the set top box, but as the smarts move into the TV, Apple has yet to enter the market. There’s little doubt that it will, though. But video is different from music : We’ll listen to our favorite songs over and over again, but most videos are viewed once, shared and then forgotten. Apple needs a rental or subscription service to truly compete with the other three here.

AMAZON: The company has no smartphone or TV presence, but is poised to disrupt the tablet world this fall with the Kindle Fire. At less than half the price of other iPad and Android tablets – with a 10” model on the way in early 2012 – and with both a rental and streaming video service Amazon presents an interesting challenge to both Apple and Google. The company is clearly betting that the tablet will be the dominant video consumption device of the future, and is looking to lock its customers into Amazon Instant Video (rental) and Prime Instant Video (subscription service). Interestingly, while the company’s Kindle book-reading software works across competing devices, their VOD services do not support Apple IOS.

MICROSOFT: With 50 million XBOX 360s sitting in front of TV sets around the world, Microsoft has the potential to be a major player here. The company is working to build a single interface across its smart-phone, PC platforms – called Metro. They are also rolling out the Zune video services across all of those devices, along with the XBOX360 as well. The Xbox currently has the broadest collection of traditional TV sources, with broader support for TV Everywhere than the other platforms. Unfortunately Microsoft does not make web-original video available to the Xbox, which limits its usefulness. And the lack of a Windows-based tablet to rival the iPad or Android devices, along with the poor performance of Windows phones put Microsoft behind both Apple and Google. But the Xbox 360 is such a strong device, with such great market penetration, that it’s impossible to count the company out.

It’s early, but Google is in the lead, with Apple nipping at their heels. If the Kindle Fire is as big a success as I think, Amazon may well challenge for the lead. As an aside, I predict that the Fire will be the best selling electronics product this holiday season.

And Microsoft? Unless Windows 8 and the Windows phone become runaway successes, it will be difficult for them to turn their 360 installed base into a dominant platform. But that’s just my early handicapping – there’s a lot of race yet to be run.