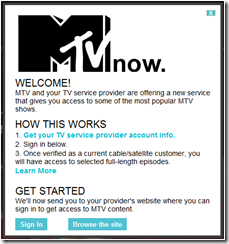 Lots of attention has been lavished on Time Warner’s plan to stream TV networks over its IP network, and the subsequent backlash from those TV networks. But that’s just one recent development that will lead to the end of the multichannel TV bundle as we know it today. Two other developments – Adobe’s new TV Everywhere authentication scheme and Comcast’s drive towards non-system network licensing spell the beginning of a scorched-earth phase that will unfold over the next year or so. And when it’s done, the media landscape will look entirely different. Let’s take a look at each of these individually, and then wrap up what it all means.

Time Warner Streams Channels Via IP: If you subscribe to both Time Warner cable and Time Warner’s internet service you now have an interesting new option: You can stream many of those TV channels you pay for over that internet network to an iPad – but only while you’re home. That’s great for the consumer, but doesn’t make Viacom nor Scripps, among others, very happy. Broadband/IP delivery of TV channels use a different distribution medium, say the owners of MTV and Food, and those delivery rights need to be negotiated separately. But from Time Warner’s perspective they are selling access to a bundle of channels, and simply letting viewers watch on a variety of screens inside the home. It’s really not all that different from what I currently do with DirecTV’s Directv2PC, except that it pulls the shows off of my local DVR, and works with PCs only – no iPads allowed.

TV Everywhere: Interestingly enough, another division of Time Warner, CNN, rolled out a fascinating implementation of TV Everywhere at the recent SXSW show in Austin TX. Sometime this summer, if you pay for CNN (presumably through cable or satellite), you’ll have access to all of CNN, in HD Quality, live and on demand. And you’ll be able to watch anywhere you have internet access, on any device that supports HTML5 – along with separate apps for Smart TVs, tablets and other devices. Forget cable or IP at home: we’re talking worldwide access to the channels you’ve already paid for. It’s similar to what I currently get from the pricey NFL Sunday Ticket TV service I purchase from DirecTV. As a subscriber, I can access games anywhere around the world on my PC, iPhone, iPad or other device

And now Adobe has released its “Pass for TV Everywhere” service that provides authentication designed to make it simple for subscribers to sign in once and get streaming access to the channels they’re already paying for. It’s actually live now too – for example, some Comcast customers can watch Viacom’s MTV or many Time Warner channels, including TBS and TNT, on a wide variety of devices, streamed via broadband networks, today.

You can see them in action here:

Comcast Acquires Non Cable Rights: Wait, what’s going on here? Viacom’s upset with Time Warner letting its customers streaming MTV via IP to an iPad at home, but perfectly OK with Comcast customers streaming MTV to almost any device, anywhere in the world. What’s the difference? It’s a matter of rights. Over the last few years as Comcast renegotiated its carriage agreements with cable channels, it started inserting a clause that let the cable giant stream channels via the internet, along with delivering them over their traditional cable plant. Yes that’s great for TV Everywhere, but it also enables a different type of service – one that has Time Warner Cable shaking in its boots. Comcast is now positioning itself to deliver a bundle of multiple channels to paying customers without actually having a cable-based relationship with those customers. Or in other words, Time Warner internet customers will soon be able to buy their TV channels from Comcast.

Now that’s disruptive. According to my sources, Comcast has not yet decided to actually release this product – but it’s under development, and the rights are being secured even as you read this.

So here we have Comcast securing rights to stream cable channels like MTV, Food, CNN and ESPN over broadband internet/IP networks. We have Time Warner streaming some of those same channels to iPads inside homes that already subscribe to those channels via Time Warner’s cable system. And we have the TV networks working with Adobe and other software companies to authenticate viewers to allow them to stream the channels they are already paying for to their mobile tablets, phones, computers, smart TVs and other over the top boxes. What a mess.

Here’s what I think will happen. First, packages of multi-channel services will become unbundled from the physical transport – so for example you’ll be able to buy your TV shows from Comcast and your internet service from Time Warner. But the individual TV networks will own the “Everywhere” authentication process, and begin to build a direct relationship with consumers. And once the bundles are unbundled, and the networks have a direct line to the consumer, the middleman (Comcast, Charter, Dish, DirecTV) will become disaggregated. And that means the end of the TV market as we know it.