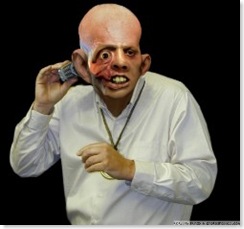 Scott Adams, author of Dilbert and a very entertaining blogger, just put up a speculative post imagining new features for your cellphone.  Most of them are very good, but one of them is way off base.

BRAIN-EXTENDER: Google and Wikipedia are already brain extenders. You can find almost any information you want and quickly. But imagine how much cooler it would be if your iPhone headset was continuously monitoring your conversations and answering your questions as they arise, or whispering suggestions in your ear. That application seems likely to me.

OK, this was obviously written by someone with little or no experience with an IFB – also known as an Interruptible Feedback device.  These are those little in-ear speakers, used by TV producers to talk to their live television show hosts.

You’ve seen them before – they’re the flesh colored inserts, with spiral connections, that occasionally show up during sports events, news shows and other television programs.  I’ve worn them many times, both when I was hosting shows, and guesting on news shows including CNN and MSNBC.

They can be very disconcerting, especially in the hands of an imbecile or sadist – and there are more of those producing television shows than you might think.

There you are, demonstrating a cool new product, or having a spirited conversation with Al Roker, and a disembodied voice suddenly cries out – inside your head – "tilt it down", or "there’s something hanging out of your nose".

At that, all but the most seasoned TV professionals will freeze up, lose focus, and start exhibiting that well known "Deer in the Headlights" expression.  It took me years to learn how to either completely ignore the voices, or give them just a tiny, tiny piece of my awareness.

Let’s face it – most of us can’t even safely talk on the cellphone and drive at the same time.  Imagine if we had a little voice in our head, 24/7, giving us hints, answering questions, or babbling insanities.  It will truly drive us all insane.  And mark my words – the State of California will quickly ban it while driving – and the entire population will ignore the ban.

I may have learned to live with occasional voices in my head, but I guarantee you that most of you will not.  Remember, that at least until today, hearing voices in your head meant a quick trip to the funny farm.  And when we’re all a little "funny" in the head, I’m outta here.