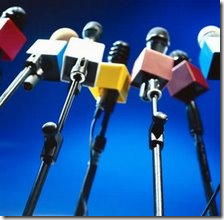 This is part three of a six part series from two financial conferences over the last 10 days.  Enjoy, tomorrow we’ll focus on the future of the DVD

How healthy is the video advertising market? The cable and broadcast companies that presented struck a cautionary note.

Scripps, for example, has seen a 12-14% cancellation rate of contracts purchased during the last up-front, where big brands lock in their advertising purchases and positions for the coming year. That compares to about 4-5% for February 2008. Some of it is coming back in the “scatter” market, where individual ad slots are purchased, but not enough to make up for the shortfall.

The real discussion, however, focused on what this year’s upfront will look like. The general sentiment seems pessimistic, but everybody mostly avoided the question. Time Warner’s Bewkes noted that last year they were the highest performer at the upfront, and suggested that “be at the top of the industry again” this year. But he wouldn’t say whether it would be up or down. Discovery’s CFO said it was too early to tell, but predicted that the overall price increase won’t be “as strong as last year”. Scripps sees a “tighter ad market”, with “more agencies and clients looking for efficiencies”.

I’m reading between the lines here. If the upfront is relatively flat this year, that will be a good thing. Because it seems to me that most cable and broadcasters think it’s going to be down. If it is, though, and the market comes back, “we could be in a nasty scatter market, where everyone tries to jump back in”, according to Jim Poh of Crispin Porter.