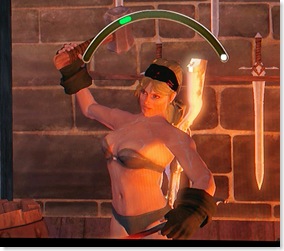 Is it wrong to be infatuated with your video game character?  That’s the question I keep asking myself as I play through the stellar new video game Fable 2, from rock-star developer Peter Molyneux.

The latest installment in the popular Fable world takes place 500 years after the first, and includes a host of new features and capabilities.  I was particularly taken by the stunning new graphics which paint an open Oblivion-like world that offers nearly endless exploration opportunities.  And in this version you even get your very own dog – who becomes a key part of the game,  helping you to uncover hidden treasure and finishing off fallen enemies.

As with the first version, your in-game choices cause your character to evolve towards good or evil – and the rest of the world reacts as your character changes. But this latest version also lets you play through the game as either gender, which sits squarely at the root of my dilemma.

I received an early copy a few days before the official launch, and I’m not sure who was more excited – me or my nine year old son Sam, who has had Fable 2’s launch circled on the calendar for months.  Sam has played through the first version of Fable many times, fascinated by the game’s moral underpinnings, and the ability to directly see the effects of good and evil actions.

Neither the first or second installments are really designed for kids, though.  There are definitely adult themes, and the battles can seem particularly graphic – especially when you lop off an enemy’s head with just the right key combo.  I did have to explain to Sam what a "prostitute" was, during a relatively tame quest in Fable2 (a girl that likes to kiss a lot).  Even though sex is a far bigger part of the game — along with firearms, Fable’s technologists have just invented the condom — you can avoid it entirely, which my son has wisely chosen to do.

Not me.  When the game arrived, Sam immediately began playing as a boy.  After an hour I began my own character – and since you can play a girl I figured I’d give it a try.

But after carefully evolving my character Missy through the first third of the game, keeping her away from fatty snacks, and focusing her training, I’d grown abnormally fond of the girl.  Sure, I’d given her a more winsome haircut, and found some dye to turn her blond.  And yeah, I’d discovered the adolescent joy of stripping her down to her skivies; the Fable equivalent of ogling underwear models in the Sunday paper.

I’d even maneuvered her into becoming a master Blacksmith, in part because you need a job in Fable to raise enough money to buy weapon, houses and baubles.  I could have focused on woodcutting, bartending or bounty hunting, but truth be told a topless Missy just looked so darn good making swords I couldn’t help myself.

I’d grown so fond of her, alas, that I wouldn’t even let her flirt with other guys.  I’m not completely heartless, however, I did find her a nice lesbian barmaid to settle down with – alas, they’ll never have babies together, but they do appear to enjoy consensual sex.  It’s hard to tell, though, because as soon as they get into bed the lights go out. 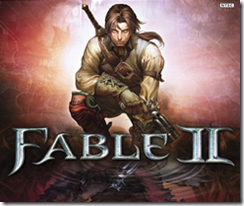 Even though you can now fight with guns, battle hasn’t changed much.  You still button-mash your way to glory with hack and slash attacks and magic.  You no longer have a finite reservoir of magic (aka Will), instead you hold the magic button down to build up Will for more involved spells.  This is both good and bad – you never run out of magic in a fight, but you can’t immediately whack your enemies with a super-powerful spell.  The game also moved the magic button to the RED B, which was a major problem – as I frequently found myself accidentally casting spells in towns, scaring away potential lovers, shopkeepers and other townfolk, and incrementing my "bad meter".

On the plus side, in Fable 2 you never die.  Run out of life force, and you fall to the ground, lose any unassimilated experience points, and then rise to fight again – albeit with a brand-new disfiguring scar.  My son thought these blemishes were cool looking – I was horrified, and worked overtime to keep my Missy pure.

Neither Sam nor I have finished yet, although he’s much further along than me.  It’s not a game you rush to complete though, as much of the fun is found building your life, becoming an expert at different skills, and performing the various interconnected quests.

Even though its 500 years later, the world seems familiar, the characters haven’t changed a lot, and you still get the somewhat guilty pleasure of kicking chickens and munching on crunchy chicks.  It does seem harder, however, to become really good, or truly evil, but that’s OK.  As long as I can keep growing my character’s attributes and exploring the amazingly detailed and often wryly humorous world, that’s OK.  But next time, perhaps, I’ll opt for a male character instead.  Until then, don’t tell my wife, please, about my emotional attachment to Fable.  She just wouldn’t understand.

30 Thoughts on “Help, I’m Infatuated With My Fable 2 Avatar”